The connection termination phase uses a four-way handshake, with each side of the connection terminating independently. When an endpoint wishes to stop its half of the connection, it transmits a FIN packet, which the other end acknowledges with an ACK. Therefore, a typical tear-down requires a pair of FIN and ACK segments from each TCP endpoint. After both FIN/ACK exchanges are concluded, the side which sent the first FIN before receiving one waits for a timeout before finally closing the connection, during which time the local port is unavailable for new connections; this prevents confusion due to delayed packets being delivered during subsequent connections.

It is also possible to terminate the connection by a 3-way handshake, when host A sends a FIN and host B replies with a FIN & ACK (merely combines 2 steps into one) and host A replies with an ACK. This is perhaps the most common method.

It is possible for both hosts to send FINs simultaneously then both just have to ACK. This could possibly be considered a 2-way handshake since the FIN/ACK sequence is done in parallel for both directions.

Some host TCP stacks may implement a half-duplex close sequence, as Linux or HP-UX do. If such a host actively closes a connection but still has not read all the incoming data the stack already received from the link, this host sends a RST instead of a FIN (Section 4.2.2.13 in RFC 1122). This allows a TCP application to be sure the remote application has read all the data the former sent—waiting the FIN from the remote side, when it actively closes the connection. However, the remote TCP stack cannot distinguish between a Connection Aborting RST and this Data Loss RST. Both cause the remote stack to throw away all the data it received, but that the application still didn't read.

The three steps of a TCP three way handshake and how two TCP devices synchronize.

The three-way handshake begins with the initiator sending a TCP segment with the SYN control bit flag set.

Active Open. In an Active Open call a device (client process) using TCP takes the active role and initiates the connection by sending a TCP SYN message to start the connection.

Passive Open A passive OPEN can specify that the device (server process) is waiting for an active OPEN from a specific client. It does not generate any TCP message segment. The server processes listening for the clients are in Passive Open mode.

The Active Open device (Device A) sends a segment with the SYN flag set to 1, ACK flag set to 0 and an Initial Sequence Number 2000 (For Example), which marks the beginning of the sequence numbers for data that device A will transmit. SYN is short for SYNchronize. SYN flag announces an attempt to open a connection. The first byte transmitted to Device B will have the sequence number ISN+1.

This handshaking technique is referred to as the Three-way handshake or SYN, SYN-ACK, ACK.

After the three-way handshake, the connection is open and the participant computers start sending data using the sequence and acknowledge numbers.

In TCP connection, flags are used to indicate a particular state of connection or to provide some additional useful information like troubleshooting purposes or to handle a control of a particular connection. Most commonly used flags are "SYN", "ACK" and "FIN". Each flag corresponds to 1 bit information. Posted by Prasanjit Singh at 8:06 AM No comments:

I recently completed the Six Sigma Black Belt Certification. So here is a set of collected notes that summarise what it is and how to put it into practice. Hopefully, this will clear a lot of doubts about Six Sigma and allow budding Program Managers to understand the concepts without having to read too many books and material out there!

To apply Six Sigma to your business and produce the best results, you need to understand what Six Sigma is, the principles of Six Sigma, and the DMAIC problem-solving method. The correct tools and use of the Six Sigma scale and methods will keep your data dependable and reusable.

What Is Six Sigma?

Generally, Six Sigma is a problem-solving methodology that helps enhance business and organisational operations. It can also be defined in a number of other ways:

Six Sigma is based on a handful of basic principles, and these principles create the entire Six Sigma arrangement. Here are Six Sigma's fundamental principles:

The Six Sigma scale shows how well a vital feature performs compared to its requirements. The higher the sigma score, the more efficient the feature is. This table shows the universal Six Sigma scale:

The DMAIC Method of Six Sigma

The DMAIC (Define-Measure-Analyse-Improve-Control) project method is a formalised problem-solving process of Six Sigma. It's made-up of five steps to apply to any procedure of a business to improve effectiveness.

The Tools-Methods Landscape of Six Sigma

Having the right tools and knowing how to apply them to your Six Sigma projects will help you produce accurate, acceptable, and reusable outcomes. Here's an overview of the Six Sigma landscape:

As seen above, The Six Sigma Methodology uses the DMAIC approach.  It is a five-step approach that drives unwanted variation from products and processes. By understanding and controlling underlying root causes, teams fix problems at the source, resulting in the lowest possible cost of quality for a given process. 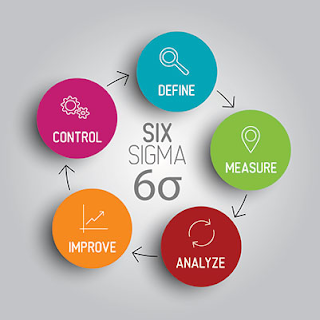 It's no wonder that so many feel like lost when it comes to Six Sigma: every significant process improvement tool developed over the years has been placed under the Six Sigma umbrella, along with a healthy dose of statistics. But the good news is that most processes can be improved with a well-defined problem, the right team, and a simple set of process improvement tools. So the Pareto Principle applies to the Six Sigma toolkit itself: a small handful of process improvement tools (which existed long before the Six Sigma approach was created) will solve the majority of the problems that a team will encounter – tools involving very little in the way of statistics. Too many Six Sigma practitioners and consultants make Six Sigma about the tools, and not about the results. Stay focused on results and learning the best methods to achieve those results, and you will become a "designated-hitter" in your organisation.

So what are the key ingredients and tools that will solve the majority (let's say 4 out of every 5) of process improvement challenges?

If the above ingredients are in place, the team has an excellent chance of succeeding. Now for some specific tools to deploy during the problem solving process –

That's it. The remaining 20% of the problems might need more advanced methods inside the DMAIC toolkit.  Understanding those tools will place you in the top 1% of all problem solvers.

Posted by Prasanjit Singh at 7:38 PM No comments: