Good News for Windows Lovers ! Windows 8 is here for download and that too FREE !!!

Windows 8 is the next version of Microsoft Windows, a series of operating systems produced by Microsoft for use on personal computers, including home and business desktops, laptops, Microsoft Tablet PCs, and Home theater PCs. According to unofficial sources, the release date for Windows 8 has been set for October 2012, three years after the release of its predecessor, Windows 7. Windows 8's server counterpart, Windows Server 2012, is in development concurrently with Windows 8. The most recent official pre-release version of Windows 8 is the Release Preview, which was released on May 31, 2012. 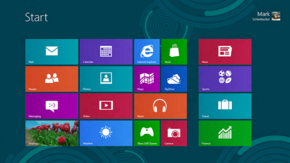 Note before you download: Windows 8 Release Preview is pre-release software that may be substantially modified before it’s commercially released. Microsoft makes no warranties, express or implied, with respect to the information provided here. Some product features and functionality may require additional hardware or software.

Posted by Prasanjit Singh at 6:59 PM